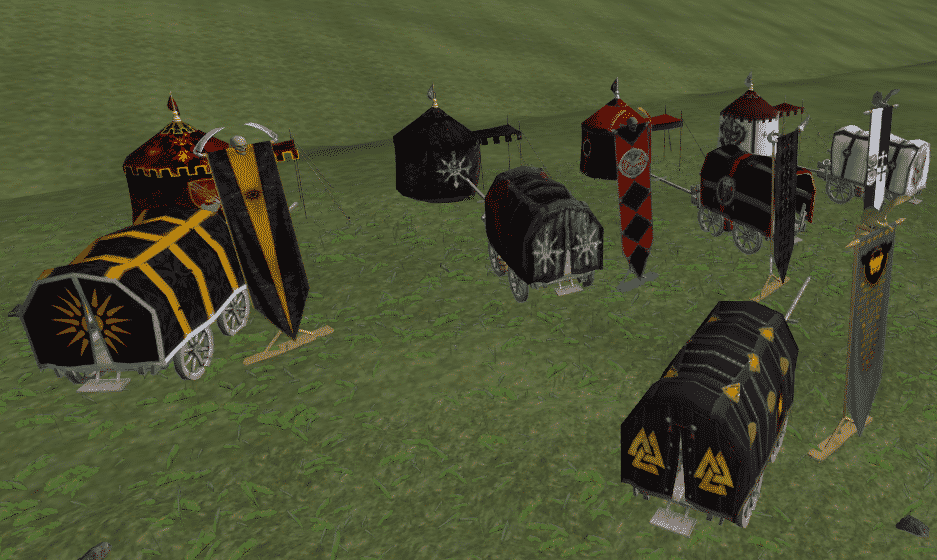 This week we have added several new kingdom items that you can craft at your whim. Note the tents do let at least the placer spawn at them, but you can not hitch horses to them at this time. Any bugs should be reported so I can look into them. All of the items in the picture below plus the associated flags and banners are now craftable along side of all of the currently craftable kingdom items! 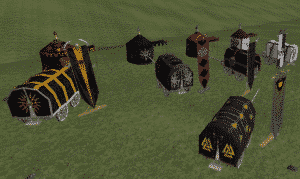 We have also turned off epic on the Battle server. It is now still the only server with kingdoms and PMK’s but you can no longer go there just to take advantage of the epic curve, you should go there because you want to fight as a kingdom.

After discussion with the staff, we will be moving the HOTA off of battle and Prime onto the new Northlands server, to make that the only Hota, and encourage people to go there and fight for the statues. There may be more discussions on how to make it a bit easier to get there, but with the nature of the zone I do not feel a portal directly to it will be viable, as it could get camped. Travel to it across the 2046 pvp zone area is not a bad idea though to encorage it to be a group adventure. For now there will be no HoTA while everything gets set up.

There is now a new command /balance you can use this command to check how much money you have in the bank. This should help those who trek out to remote locations that are hunting for bounites to get their deed know where they stand on being able to get their deed up.

I have adjusted the ash production, hopefully it will be slower now, this is an ongoing tweaking process just let me know how it is working out for you.

That is all for this week, more to come next week, don’t forget to collect those evil easter bunny eggs!

Thorn
Nice updates. Is there a downloadable version of the maps available to us? (specifically Northlands)Thanks,-Thorn
Reply

Xype
Maps link at the top of the page, has a Northlands link.
Reply

Thorn
Having some troubles with the current map viewer as it is inaccurate for finding materials deposits that are only 2 -3 tiles wide. I have found several sources of clay in Northlands, none of which are displayed on the provided map. I can provide exact coordinates for examples if desired.
Reply

Xype
They are there, zoom in, things get more detailed the closer you get, down to the tile.
Reply